Firstly, I openly admit that my first born son led me into a false sense of security as far as parenting was concerned. It just wasn’t particularly difficult.

A shock to the system, yes, and totally exhausting. But other than the first few months of the new parent fog, it pretty much all fell into place and I breezed through being a first time mum. He was just a really easy baby, always happy, chilled out, loving and a sweet little boy. We never had to baby proof anything and at 5 years old he is yet to have a tantrum. I may have even been a little bit smug and maybe a bit too confident about my parenting abilities.

This Mum Is Kept On Her Toes

Well then River came along 3 years later and opened my eyes! To be honest it was still pretty easy in the beginning, he was a very chilled out and sleepy baby, and kind of just fitted in with our family immediately. After a very fast birth, two days later we were out on a day trip to a local farm and just slotted into life as a family of four. Later, at 6 months old, River was diagnosed with Down syndrome, which we now know is probably the reason River was such a quiet baby.

It certainly didn’t stay that way though let me tell you. River, like his brother Skyler is incredibly happy, funny and go’s with the flow, yet he also has a whole load of stubbornness, determination, feistiness and mischief rolled in there. I believe his personality is a blessing for the life he has been given, and his strong personality will serve him well. However, this Mum is kept on her toes!

It’s Not A Down Syndrome Thing

I am determined that I won’t put every challenging behavior we face with River, into the ‘it’s a Down syndrome thing’ box. It’s way too easy to do that. All children face behavior challenges in their development, and often they are exactly the same challenges as people with Down syndrome face. Some children are just a handful! The truth is though, that children with Ds are more likely to engage in behaviors that can be problematic to their families and caregivers, and it can be difficult for parents to work out the best way to deal with it. I’m all for treating our children the same as any other child, but realistically our responses may need a little tweaking.

First and foremost it’s important to rule out any medical conditions as a cause for challenging behaviors. Hearing/vision deficits, thyroid problems, celiac disease, sleep apnea, anemia, reflux and even constipation can play a big part in children acting out and often when they are addressed, the behavior will correct itself. Also, there is a higher rate of illness in our children, and children always play up when they are poorly! And the same goes for tiredness, it’s every parents curse to have a tired child and many of our children have sleep disorders.

Also diet, is your child eating healthily? Junk food, sugars and additives have a lot to answer for when it comes to the behavior of children. Nobody needs to eat unhealthy food daily, and if you and your family are eating more sugary/processed/fatty food than necessary, then addressing that might be a huge benefit to you.

Now I’m very lucky with River. He certainly has a feisty little spark, but on the whole he isn’t too difficult. So far anyway! He’s just turned 2 and I’m well aware that I have many challenges to come, probably not too far away either. I catch glimpses of that toddler attitude popping out quite often lately haha.

However, there are a lot of parents facing much bigger things than me, from attention issues, social withdrawals, noncompliance, habits/compulsions, self-talk, aggression and so on. And the common worry for parents of children with Ds, the dreaded running! I’ve heard so many horror stories from other mums and it’s terrifying. When I see River crawling out of the house as fast as his little legs will go and hiding under the car, I see a glimpse of my future.

Knowing I’m constantly going to have to be alert and literally grow eyes in the back of my head is a worrying thought, and other than reigns and location watches I’m not sure how I will deal with it. I do know though that it is so important to me that he gets to see the world and explore, and staying home and staring at four walls all day just isn’t an option. There is nothing more disheartening than being home alone with your child, knowing you would both be benefitting if you could just get out without worrying. It’s just so hard as a mother to not have all the answers, why can’t there just be a manual?

River is still very young, but we’ve already faced some challenges with him. Hitting and biting us being the main one, although funnily enough he has never done it in an angry way. Again though, I know this is not a Ds thing, however I do think it was magnified by his inability to communicate well.

Lack of communication skills is probably the main factor in behavior issues in children with Down syndrome; they just struggle to get across their needs. River’s main reason for lashing out was excitement and frustration, and he would pinch my face, pull my hair, slap me and bite.

We also breastfeed, and the amount of excruciating nipple bites I got was unreal. The memory of it makes me grit my teeth, but he was just using his actions to get the attention he needed, as he couldn’t tell me what he wanted. He also really wants to be walking, but his weak ankles just won’t let him. This must be terribly frustrating for him and he is an active little boy. 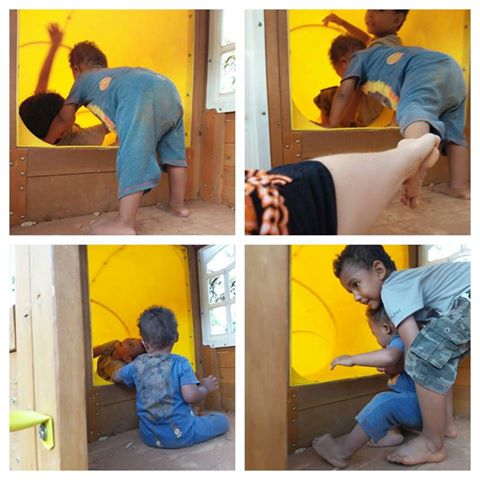 I decided on a positive approach

It was so difficult to know how to deal with it, as it certainly wasn’t ok and was not going to be ignored, but at the same time it is totally normal behavior. I decided on a positive approach and not getting angry, as I actually don’t think that would have bothered him in the slightest. In fact, he’s been known to find it funny and as he’s a determined little guy it never put him off!

I’ve never been a fan of strict discipline, and I personally just think it reinforces bad behavior. Saying ‘no’ constantly rarely works, in fact it’s more likely your child will be happy to be getting a reaction. So we went with consistently reminding him to use gentle hands, and every time he hurt one of us we made him rub it better and we pretended to be sad. My husband, son and I were all on board with this, which is very important and it was surprising how quick he just got it. It’s rare now for him to do it, and if he does we just remind him of gentle hands and it triggers his memory. Unless he is teething, then we’re in for a whole load of trouble!

I know that as River reaches the ‘terrible 2’ stage we will face similar issues, but for now, as a family we have found a successful way to deal with it. That and we are teaching ourselves Makaton to try and communicate more successfully with him, until he is talking well.

Reach out to other parents

I actually think the best piece of advice for anyone facing behavior challenges with their child, is to reach out to other parents. It can be incredibly lonely when you are facing difficulties and having nobody who understands. There is nothing harder for a mum of a child with special needs feeling isolated and not knowing where to turn to for advice. There are many groups within communities and also online that can be a huge support to families.

I live overseas with no support network and I have found it a huge relief, ‘meeting’ some wonderful people who I never would have without my online support. Just like all other parents, as special needs mums we all have different opinions and ways of dealing with things. It’s so hard to give one piece of advice regarding behavior, as we are all different.

We as parents and more importantly our children, and one method is not going to work with everyone. The great thing about finding a support network is that there’s a high chance you will find someone with similar beliefs and ideas as yourself. And there are so many different types of people, with a wide range of knowledge who are sharing ideas. You will certainly pick up advice and learn some things along the way, and even find parents who are facing exactly the same struggles. Sometimes not feeling so alone, is all you need to get back on track and confidently face any challenges head on.

Don’t forget to look after yourself

It’s ok to accept that we are not perfect, and that being a parent to a child with special needs is hard work. Actually, being a mum in general is a huge responsibility and it’s scary knowing that the choices we make are ultimately shaping and influencing the futures of our children. So look after yourselves mums (and dads of course), and find a way to not stress yourself out over these issues.

Whether it’s taking some time for yourself to clear your head and recharge, having a coffee with friends, taking a bath, reading a book, exercising or going for a walk, find a way to find your happy. Set aside time where you can just do something fun with your child, get your happy back and reconnect. It could be something as simple as going to a park and just running around together and laughing, just something that helps you remember that your child is perfect no matter what and strengthen your relationship.

Whatever challenges we face, I really believe in staying calm, it’s so much easier to tackle a challenge when you have a clear head and your emotions are in check. If I’m having a bad day, then it’s clearly evident in the behavior of my children and me being stressed solves nothing. I really do think that the way we have decided to tackle things, has so far helped us see the end of these phases a lot faster. So take deep breaths (as my 5 year old likes to remind me!), and remember that whatever comes your way, you can cope. You’ve got this!